Alice took the Walk of Wealth playing Deal or No Deal. Noel Edmonds wasted no time in getting to know the student from Monmouthshire. Alice said that she had also been training as a stunt woman for the past two and a half years and Noel wanted to find out more.

The Banker said that he found Alice a gorgeous, brave and feisty Welsh woman. 'I have had trouble with them in the past,' grumbled the Banker, referring to the first £250,000 winner, Laura Pearce. The Banker wasn't mucking around with his first offer of £8,500: NO DEAL. 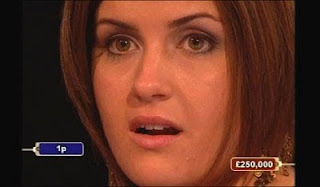 It's getting a bit serious now, but it is still a good board,' said Alice. Noel commented on Alice's daredevil side coming through as he asked the question: NO DEAL.

He said that he believed Alice always looked at the worst case scenario - if she had the round from hell then £15,000 would be the most she could go away with. Alice said she thought more about the average, which would be around £40,000. The Banker rang back and asked if it would make it easier if he offered £20,000. Alice admitted it would make a difference - so he met her half-way and upped his initial offer to £17,500. Alice said she had never gambled with money: DEAL.

Noel praised the Banker who had upped the offer, which proved too much for the thrill seeker.

As she dealt so early in the game, Alice needed to find the big one in Round 5. £750, £250 and £20,000 simply weren't good enough. The Banker said the offer would be a six-week professional wing-walking course, six weekends of horse riding training and £30,000.

The Banker rang back and spoke to Alice. After speaking for some time, she put the phone down and said, 'He's good at his job.

Noel reminded her that the Banker likes having fun too, and watching the agony on her face would give him a real buzz. Alice said that she wished her lucky Box 3 was on the Pound Table rather than Box 8. Noel reminded her that because the £250,000 was still in play, she would be guaranteed the swap if she accepted the gamble.

Noel asked the question. Alice decided to take the ultimate gamble, but declined the swap - sticking with her original box.

What have I done,' agonised Alice, as the tension rose to unbearable limits. Noel flipped open Box 8 and screamed 'Yes!' as he revealed the £250,000. The confetti rained down and her fellow contestants ran towards Alice in a spectacular celebration, which was capped by a standing ovation from the pilgrims.

A choked Noel confirmed that if she had swapped she would have won the 1p. Instead, Alice became only our second £250,000 winner.