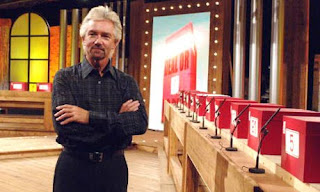 The East Wing - Or the right hand side of the set where 11 players stand behind their boxes. Between filming, it has been known for banter to be fierce between the two wings as each show their true competitive nature.

The Hotel - luxurious hostelry situated in the lush, rolling greensward of England where contestants get to stay together for as many weeks filming takes. The lucky so-and-sos even get to bring their family and friends to stay with them if they want. It is here that such great team spirit is forged that, as one contestant put it, it feels as if you’re at a family wedding. [Alcohol and the Hokey Cokey, see above, may also help in this respect.] Indeed, it is sometimes said that no one ever wants to leave.

The Independent Adjudicator - The only person who knows where the money is.

Live Play / Active Play - When a player has yet to accept a deal their game is still in live play.

Love Week - A week of special shows around Valentine's Day.

The Lucky Hat - An especially floppy straw-like bonnet that Noel puts on when he feels the player is in need of a little luck. Combined with the Lucky Teabag, the results can be spectacular.

The Lucky Teabag - A teabag that is kept in the studio kitchen and revered as a relic because of its legendary luck-bringing properties. When Lance in series two had a sniff of the teabag before his game, he subsequently went on to win £87,000 from The Banker. That’s some teabag.

The Mug - Because nothing beats a nice mug of tea in the afternoon, contestants get a huge mug with a question mark on the front, and something else on the bottom, when they fancy a cuppa. As the show can go on for two hours, remember; they need some sustenance.

The Daddy and The Mummy - Roles given to one female and one male contestant at any time, with responsibilities such as welcoming the new contestants etc.

Newbies – Every few days three new contestants are introduced into the remaining members of the original 22 after the three players go out. These are the ‘newbies’ and everyone’s really nice to them, as you’d expect.

Noel’s Book – At the beginning of the show contestants are often asked if they want to write down the sum they hope to take away with them in Noel’s book. Sometimes this is shown to The Banker, which of course can increase tension – he might offer them something just over their sum, for instance, to tempt them away from what might be a much bigger sum still on the board. Who said everything in life was fair?

Old Faithful (£26,000) - One of The Banker's favourite amounts to offer players and has made many people deal in the past, hence why The Banker & Noel now refer to it as 'Old Faithful'. It's also resulted in many victories for The Banker.

One-box game - A game where only one significant value remains, or where the gap between the highest amount and the next highest is very large.

The Pound Table – The table at which the player perches or stands as they play the game, and to which Noel comes, goes and leans. So far no one has seen fit to actually pound on the table, but it can only be a matter of time…

Prove-out - After a player has dealt they play the remainder of their game hoping to find the large reds, to prove they have done a good deal.

A Quickie - When the player chooses three boxes very quickly and they are opened very quickly.

A Rapid Round – Also known as ‘a quickie’. In the first round of any game a player has to open five boxes before The Banker will make an offer. Subsequently, rapid rounds, where three boxes are opened at a time, can be played. At such times The Banker holds his breath, as if underwater. Want to win playing Deal Or No Deal Games?

The Red Box Club – A not-so-secret society formed by ex-players and fans who are passionate about Deal or No Deal. They have their own websites, hold reunions, and generally converse online about what a great time they had and continued to have watching new players give The Banker a thrashing.

Red Mist – Not a perfume launched by The Banker but the terrible fog that descends upon a player, obscuring all else available to them on the board except that one high red number. Under the influence of the Red Mist they go for it, risking all and often losing it too.

Red Run – A Deal or No Deal equivalent of the Spanish bull run, where the player is left feeling gored and dazed by a high number of reds revealed in sequence. Poor Nick got 8 in a row, and ended up founding the 1p Club

Risk Tolerance – The assessment made by The Banker on what any player will take if offered, in relation to what they might get. He’ll always claim to know more about a player’s risk tolerance – or exactly how far they’ll go before crashing and burning and giving in to him – than the players themselves. There are a few that have surprised him.

Safety Net – What Noel usually calls a good number of reds still on the board as the game progresses. A decent number of reds in middle rounds increases the chances that the player will knock out the blues before they’re gone.

She Who Can't Be Named - How The Banker refers to the first £250,000 winner Laura Pearce. If anyone mentions her name it brings back painful memories for The Banker and he ends up getting in a bad mood.

Sting in the Tail - When the last box opened in a round contains a large or key amount for the board.

The Swap – The Banker can offer to swap one numbered box for another – usually but not always at the end of the game, or perhaps earlier if the player has unwisely professed a preference for a number. The Swap is a perfect example of how The Banker’s twisted brain works when he wants to turn the screws on some poor player. They have to decide whether to swap or not…

Sweep - When the player asks the advice of the other contestants, one by one, standing behind the wings.

The Theatre Of Dreams – What some non- Manchester United fans call the Endemol West studios. In fact only Old Trafford can be called the Theatre of Dreams, and they’ve probably trademarked the phrase.

Trick or Treat - A week of special shows around Halloween.

The Walk of Wealth - That ‘ready for my close-up Mr Demille’ moment when, after the 22 players have filed in and are standing behind their boxes, the spotlight focuses on ‘The One’. The player who is chosen then walks the ‘Walk of Wealth’ down to the ‘Crazy Chair’ as the applause envelopes them, the lights reflect from their shining eyes and they know that it’s their show, their time, their moment…!

The West Wing – Nothing to do either with George Bush’s White House, it’s the line-up of the 11 contestants who stand on the left-hand side of the studio, opposite the East Wing
Posted by Deal or No Deal at 06:45