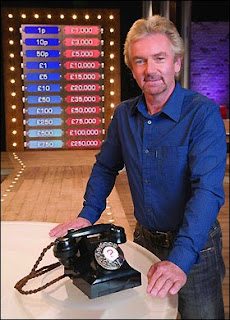 The 1p Club - This is a select group led by Nick Bain, who became the founding member when he left the show with the lowest number on the board – 1p. In the way of such things, admittance to this choice band of contestants has become rather sought after by certain players. There are those who would rather have the cachet and infamy of winning 1p, than a middling amount of money

The 1p Kiss - Tradition When a player on the wings opens their box and it contains the 1p the contestant playing to give that player a kiss to celebrate.

The 22 - This is the exact number of boxes that line up in every Deal or No Deal, and so represents the number of contestants who play in each game. Each box has a different sum of money.

‘All or Peanuts’ Game - How Noel Edmonds describes a game which only has one substantial sum of money left on the board.

Banker's Gamble - An offer made by The Banker after a player has previously dealt, offering them the chance to go back into live play again. But only if the player agrees to hand back the offer they had previously dealt at.

The Banker - The omnipotent, enigmatic figure without whom, he would have you believe, there is no Deal or No Deal. And he’s probably right.

The Battle of the Sexes - Four weeks in 2007 when male only contestants played followed by female only. At the end, the accumulative winnings of each sex was totaled to see which sex was the luckier. The men won.

The Big One - The largest amount of money that any player can win, if they play their boxes and the Banker right: £250,000. In used fivers (actually it’s a cheque). Strangely, the Big One is not necessarily the reason that everyone plays the game. Many contestants set their sights much lower, with some literally going for broke. However, for the Banker this is his precious baby and he fiercely guards it round the clock.

Big Winners - These are the people who have done the most to disprove the myth of invincibility that The Banker likes to surround himself with, for they have won £50,000 and over.

Black Widow - The name given to a female contestant with a tendency to reveal high amounts and subsequently ruin people’s games.

Blues Cruise - They do say that taking a cruise is good for one’s wellbeing, and in Deal or No Deal, a Blues Cruise can make a player very happy indeed. It involves opening a bunch of blue numbers in succession, thereby getting rid of a lot of low amounts and leaving the player with an improved chance of a high win.

Break - A chance for the viewer to enjoy some advertisements (or indeed make a nice cup of tea). In the lead-up to every ad break, Noel tries to offer a ‘Witty’ way to introduce it, perhaps suggesting to the player that they ‘break a leg’.

Board – This is the large, illuminated sign that shows all the amounts of money that are on offer, It marks a player’s progress as they knock different amounts off the board. The Banker, who likes to think of himself as chairman of this Board, always claims that what’s left up can transfix a player – and then reminds them that they might perhaps wish to cut their potential losses and accept his more-than-fair offer. Has the Deal or No Deal Dictionary got your mouth watering yet to Play Deal or No Deal?

1p Caravan - The second “home" of the 1p club after they had outgrown their Phone box. See also Phone box.

Christmas Stars - A week of special shows involving contestants who have been nominated to play. In each of their games the other box openers are friends, family and other individuals who have been touched by their work.

The Confetti - When a player wins the £250,000 jackpot it is celebrated by lots of colourful confetti raining down from the ceiling of the Dream Factory.

The Crazy Chair - Noel’s name for the stool the contestants are offered at the beginning of a game. Some players use it as a vague base from which they prowl around the set. Noel named it the Crazy Chair because, like the drivers’ seat in a car, once certain people are in it, they go a little mad and are no longer the person they seemed to be.

Curse of the Newbie - Newbies are considered to be a curse by many players after their tendency to reveal a large amount on their first show.

Damage limitation territory - A phrase used by Noel when a player has most of the big numbers, and is now trying to hit some blues to improve their chances of landing a good offer from The Banker.

Dream Factory – The Endemol West end studio, where dreams are made and dashed. The production hub for the show.